The main difference between an evaporative  air   cooling system  and AC is that a cooler uses the hot air in the room and water in order to produce cool air leading to less energy consumption as it only has two major components which need powering; a water pump and a fan. A constant supply of  water is needed in order to keep the pads wet and cool the air.

Evaporative air cooling is the natural process of cooling, similar to wind flowing across a lake. Evaporative air cooler delivers 100% fresh filtered cool air at much lower cost than a refrigerated air conditioner. Thus it is the most viable & economic option for cooling large & open areas.  Moreover ,There is no need to shut doors & windows. In fact, when doors & windows are left open, it works more efficiently.

Some of the advantages of  these  Evaporative cooling system   are that they use up to 60-80 percent less electricity than  refrigerative units. Evaporative air cooler require very little space for installation and feature revolutionary directly coupled motor technology that can cool your entire home or working space measuring up to 1500 sq.ft. with just 1.1 kw electric power.

These are some of the major differences between Cooler and AC.

HOW DOES AN EVAPORATIVE AIR COOLER WORKS 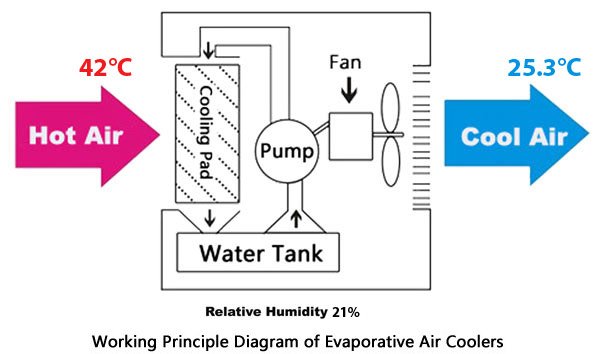 An Evaporative air cooler works on the principle of evaporation of water. When water and hot air come into contact, the water evaporates. Each EVAPOLER cooler contains large cooling pads. A special water distribution system uniformly spreads water over the surface of the pad, to keep the entire air contact surface thoroughly wetted. As the hot air passes through the wet pads the water absorbs some of the heat as it evaporates. The beautifully cooled fresh air is then delivered into the building.

Natural evaporation cools the air, while the pads filter out dust, pollen and other contaminants that can trigger hay fever & asthma. The result: cooler, cleaner & fresher air without use of potentially toxic refrigerants & chemicals.

THE PRINCIPLES OF EVAPORATIVE COOLING

As water is evaporated, energy is lost from the air, thereby reducing the temperature of incoming air. Two temperatures are important when dealing with evaporative cooling systems.

This is the temperature that we usually think of as air temperature, measured by a regular thermometer exposed to the air stream.

This is the lowest temperature that can be achieved by any evaporative air cooling system at 100% efficiency.

Evaporation will take place when the humidity is below 100% and the air begins to absorb water.

The term humidity describes how much water is already in the air relative to the amount it is capable of holding. Air is saturated when it cannot hold any more water. Imagine it as a sponge, if the sponge held half as much water as it was capable of holding, it would be 50% saturated. In the case of air, we would describe the Relative Humidity as being 50%.

Energy is required to change water from liquid to vapour. This energy is obtained in an adiabatic process from the air itself. Air entering an evaporative air cooler gives up heat energy to evaporate water. During this process, the dry bulb temperature of the air passing through the cooler is lowered and hence the cooling effect.

Save on Running Costs

Save on Running Cost

COMPARISON WITH OTHER COOLING AND AIR CONDITIONING SYSTEM :

No heat is released to the atmosphere from the Evaporative air coolers.

Research has shown that as temperatures climb, productivity and attentiveness drops off. Whether you are in school, church, at work, or in your home, being comfortable is important. Evaporative air cooling provides 100% fresh, cooled air continuously while conventional air conditioning uses a closed system that re-circulates the same stale air over and over again. Then constant air movement of the evaporative air cooler system pushes hot air out, thereby removing dust allergens, smoke odor and pollution while replacing it with cool fresh air. This is good for you, and makes our air cooling systems kind to asthma and allergy sufferers.

Every time a consumer chooses an evaporative air conditioner over a refrigerated system, the benefits for the environment are significant.

NO PRODUCTION OF CFCs AND HFCs 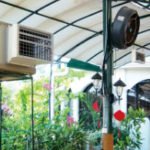 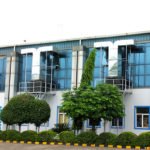 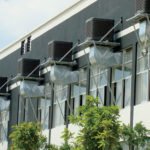 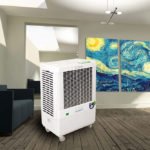 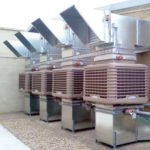 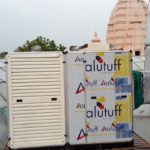